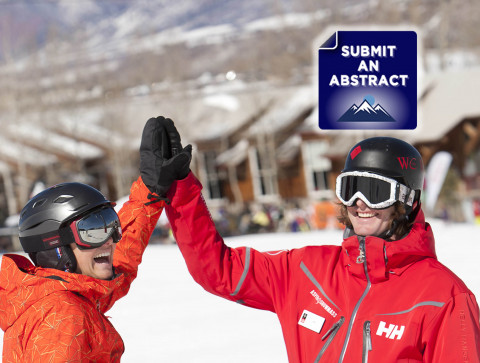 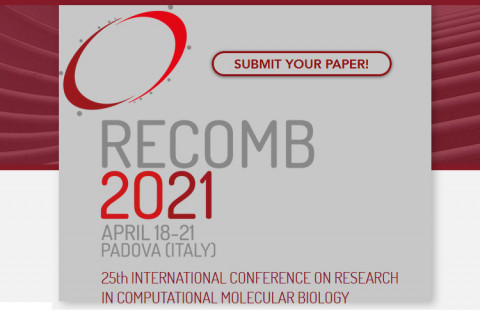 Help shape the future of ISCB 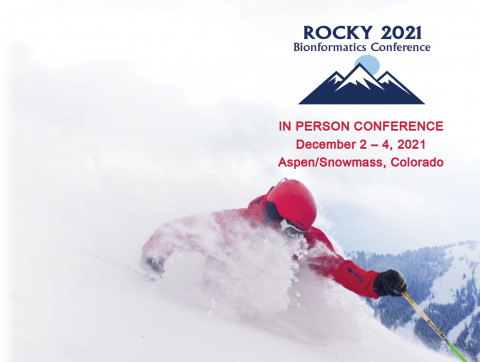 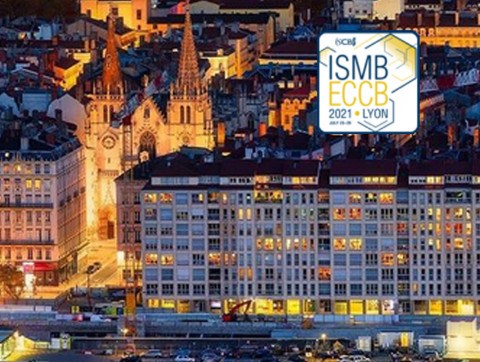 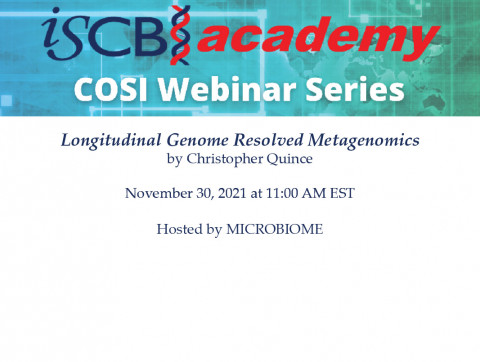 Bonnie Berger is Professor of Applied Math and Computer Science at MIT, and head of the Computation and Biology group at MIT's Computer Science and AI Lab. Her recent work focuses on designing algorithms to gain biological insights from advances in automated data collection and the subsequent large data sets drawn from them. She works on a diverse set of problems, including Network Inference, Protein Folding, Comparative Genomics, and Medical Genomics. Additionally, she collaborates closely with biologists in order to design experiments to maximally leverage the power of computation for biological explorations.

After beginning her career working in algorithms at MIT, she was one of the early researchers in the area of computational molecular biology and, together with the many students she has mentored, has been instrumental in defining the field. Professor Berger has won numerous awards including a National Science Foundation Career Award, a Radcliffe Bunting Institute Science Scholarship and the Biophysical Society's Dayhoff Award for research. In 1999 Professor Berger was named one of Technology Review Magazine's inaugural TR100 as a top young innovator of the twenty-first century and in 2003, she was elected as a Fellow of the ACM. She recently received the Test of Time Award at RECOMB 2010. Professor Berger is also an Associate Member of the Broad Institute, and an Affiliate Member of Harvard/MIT Division of Health Science and Technology.

Abstract
The last two decades have seen an exponential increase in genomic and biomedical data, which will soon outstrip advances in computing power to perform current methods of analysis. Extracting new science from these massive datasets will require not only faster computers; it will require smarter algorithms. We show how ideas from cutting-edge algorithms, including spectral graph theory and modern data structures, can be used to attack challenges in sequencing, medical genomics and biological networks.


Presentation Title: Integrating computation and experiments for a molecular-level understanding of human disease

Due to a last minute inability to travel, this talk will be a presented as a pre-recorded video followed by an interactive life feed to Dr. Troyanskaya for Q&A after the presentation.

Olga Troyanskaya is an Associate Professor in the Department of Computer Science and the Lewis-Sigler Institute for Integrative Genomics at Princeton University, USA, where she runs the Laboratory of Bioinformatics and Functional Genomics. Her work bridges computer science and molecular biology in an effort to develop better methods for analysis of diverse genomic data with the goal of understanding and modeling protein function and interactions in biological pathways. Her group includes theoretical and experimental aspects, and tackles diverse questions including developing integrative technologies for pathway prediction, study of biological networks and functional evolution, and investigation of natural tumor development. Dr. Troyanskaya is an Associate Editor for Bioinformatics, PLOS Computational Biology, and editorial board member of Journal of Biomedical Informatics, Briefings in Bioinformatics, and Biology Direct. She is also a member of the Board of Directors of the International Society for Computational Biology. She received her Ph.D. from Stanford University and is a recipient of the Sloan Research Fellowship, the NSF CAREER award, and the Howard Wentz faculty award. She has also been honored as one of the top young technology innovators by the MIT Technology Review.

The ongoing explosion of new technologies in functional genomics offers the promise of understanding gene function, interactions, and regulation at the systems level. This should enable us to develop comprehensive descriptions of genetic systems of cellular controls, including those whose malfunctioning becomes the basis of genetic disorders, such as cancer, and others whose failure might produce developmental defects in model systems. However, the complexity and scale of human molecular biology make it difficult to integrate this body of data, understand it from a systems level, and apply it to the study of specific pathways or genetic disorders. These challenges are further exacerbated by the biological complexity of metazoans, including diverse biological processes, individual tissue types and cell lineages, and by the increasingly large scale of data in higher organisms. I will describe how we address these challenges through the development of bioinformatics frameworks for the study of gene function and regulation in complex biological systems and through close coupling of these methods with experiments, thereby contributing to understanding of human disease.


Presentation Title: The Evolution of Enzyme Mechanisms and Functional Diversity

Enzyme activity is essential for almost all aspects of life. With completely sequenced genomes, the full complement of enzymes in an organism can be defined, and 3D structures have been determined for many enzyme families. Traditionally each enzyme has been studied individually, but as more enzymes are characterised it is now timely to revisit the molecular basis of catalysis, by comparing different enzymes and their mechanisms, and to consider how complex pathways and networks may have evolved. New approaches to understanding enzymes mechanisms and how enzyme families evolve functional diversity will be described.
Janet M. Thornton, Gemma L. Holliday, Syed Asad Rahman,  Nicholas Furnham, Julia D. Fischer[1]
[1] EMBL-EBI, Wellcome Trust Genome Campus Hinxton
References:
Fischer J.D., Holliday G.L., Rahman S. A., Thornton J.M. (2010).
The structures and physicochemical properties of organic cofactors in biocatalysis.
JMB: in press (2010).

Alfonso Valencia is a biologist with formal training in population genetics and biophysics which he received from the Universidad Complutense de Madrid. He was awarded his PhD in 1988 at the Universidad Autónoma de Madrid.
He was a Visiting Scientist at the American Red Cross Laboratory in 1987 and from 1989 – 1994 was a Postdoctoral Fellow at the laboratory of C. Sander at the European Molecular Biology Laboratory (EMBL), Heidelberg, Germany.
In 1994 he set up the Protein Design Group at the Centro Nacional de Biotecnología, Consejo Superior de Investigaciones Científicas (CSIC) in Madrid where he was appointed as Research Professor in 2005.
He is a Member of the European Molecular Biology Organisation (EMBO), Founder and former Vice President of the International Society for Computational Biology where he has been Chair of the Systems Biology and/or Text Mining Tracks of the main Computational Biology Annual Conference (ISMB) since 2003.
Alfonso Valencia serves on the Scientific Advisory Board of the Swiss Institute for Bioinformatics, Biozentrum, Basel; the INTERPRO database; the Spanish Grant Evaluation Agency (ANEP); the Biotechnology and Biological Sciences Research Council (BBSRC) expert panel; as well as the Steering Committee of the European Science Foundation Programme on Functional Genomics (2006 – 2011). His Group participates in the three main Bioinformatics Networks of Excellence organised under the 6th European Framework Programme (BioSapiens, EMBRACE and ENFIN).
Alfonso Valencia is Co-Executive Editor of Bionformatics, serves on the Editorial Board of FEBS J, EMBO Journal and EMBO Reports, among others. He is Director of the Spanish National Bioinformatics Institute (INB).
Abstract:

Cancer was initially described as a “disease of the genes” to remark its molecular and genetic character. More recently the concept is evolving towards a definition of cancer as a “disease of the pathways”. A definition that makes clear the need of involving Bioinformatics and Systems Biology approaches in the analysis of cancer data, a need that is even more obvious when personalize genomic information is considered.
In this presentation I will describe some of the possibilities and limitations of the current methods, and I will illustrate them with examples taken from collaboration with pathologists and clinicians. I will make particular emphasis in those areas of Bioinformatics closer to the scientific activity of my group, including: a) analysis of protein binding sites, b) study of splicing variants and c) structural variations, d) comparative pathway analysis and e) extraction of variation-drug-disease relations from text and databases.
The experience of the initial personalize-medicine initiatives makes obvious that the problems are larger than the ones that any single group can solve. The goal of my presentation will be to challenge the ISMB community to develop a concerted effort in this direction.


Presentation Title: M pneumoniae (Towards a full quantitive understanding of a free-living system)

Luis Serrano was born in 1959 in Madrid, Spain and studied Biochemistry at the University Complutense in the same city.  After a PhD in celular biology he moved to the UK with Prof. A.R. Fersht where he worked in the field of protein folding.  In 1993 he moved to the EMBL in Heidelberg as a group leader working in the fields of protein folding and design.  In 2001 he became the head of the structural and computational biology programme at the EMBl and the interests of his group shifted into the emerging area of systems biology.   In 2007 he went back to the center for genomic regulation (CRG) in Spain to head the EMBL-CRG systems biology programme as well as become vicedirector of the institute.  He has published mre tan 250 articles in interntional journals as well as is the scientific founder of four biotech companies.  He is EMBO meber and has received the Mari Curie Excellence award.  His group is currently working in the fields of Systems and synthetic biology, focused on signal transduction in eukaryotes and in the redesign of small bacteria for medical purposes.

Abstract:
Acquiring and integrating large-scale, quantitative biological data is a common feature of Systems Biology studies. However, integrating these diverse data and providing additional functional understanding on how cells work and how central processes are regulated remain an important challenge for the field of Systems Biology. A plausible approach to gaining novel biological insights from large-scale data-sets lies in the combined application of these independently developed methodologies in a suitable model organism to the same biological sample, but under different growth and stress conditions. We use Mycoplasma pneumoniae, a human pathogenic bacterium causing atypical pneumonia as model system for our study. Containing a reduced genome with only 690 ORFs, this bacterium is an ideal organism for quantitative, systems-wide studies, avoiding technical limitations due to sample complexity. We report here the metabolomics, transcriptomics and proteomics analysis of this simple organism. Our data shows that even the simplest of the bacteria has a level of complexity that prevents its full quantitative understanding.


Presentation Title: From sequences to ontologies - adventures in informatics

Biography:
Michael Ashburner (1942-) is Emeritus Professor of Biology at the University of Cambridge and is the former Joint-Head of the European Bioinformatics Institute (EBI).

His major research interests are now the structure and evolution of genomes. Most of his research has been with the model organism Drosophila melanogaster, about which he has written the standard research text (Drosophila: A Laboratory Handbook, Cold Spring Harbor Press, New York, 1989, 2nd ed. 2005). His research has covered a range of subjects, from classical genetics, developmental biology, cytogenetics to evolution, at both molecular and organismal levels. He was a member of the consortium which sequenced the entire genome of this fly (of which he published an account, Won for All: How the Drosophila Genome was Sequenced, Cold Spring Habor Press, New York 2006). He has had a strong interest in the provision of databases for biologists for over 20 years. He was a founder of FlyBase, a major database for researchers using Drosophila as a model organism, a co-founder of the Gene Ontology Consortium (http://www.geneontology.org/), a project to provide infrastructure for biological databases by a defined taxonomy of gene function and of the broader Open Biologocal and Biomedical Ontologies Project (http://www.obofoundry.org/).