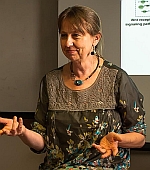 Teresa Przytycka is a Senior Investigator at the National Center for Biotechnology Information, National Institutes of Health where she heads Algorithmic Methods in Computational and Systems Biology research group. Her research focuses on dynamical properties of biological systems including spatial, temporal and/or contextual variation and exploring how such variations are impacting gene expression, how they affect network topology, function, and the phenotype of the organism. In particular, her group strives to understand the emergence of complex disease phenotypes such as cancer, to identify molecular pathways dys-regulated in cancer, and to develop computational methods for detecting causal genetic mutations, and their interactions. She is also working on understanding the role of alternative DNA structures for gene regulation and developing methods for analysis HT SELEX data. Pierre Baldi earned MS degrees in Mathematics and Psychology from the University of Paris, and a PhD in Mathematics from the California Institute of Technology. He is currently Chancellor's Professor in the Department of Computer Science, Director of the Institute for Genomics and Bioinformatics, and Associate Director of the Center for Machine Learning and Intelligent Systems at the University of California Irvine. The long term focus of his research is on understanding intelligence in brains and machines. He has pioneered the development and application of deep learning methods to problems in the natural sciences such as the detection of exotic particles in physics, the prediction of reactions in chemistry, and the prediction of protein structures and gene regulatory mechanisms in bioinformatics. He is and Elected Fellow of the ISCB.