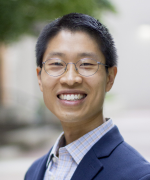 Genetic association studies have discovered hundreds of thousands of common single-nucleotide polymorphisms (SNPs) associated with human phenotypes. However, such associations have generally been difficult to interpret, often only providing hints of other nearby genetic variants that causally modify traits. In this talk, I will describe progress on ascertaining and evaluating the effects of understudied forms of genetic variation, including variable number tandem repeats (VNTRs) and copy-number variants (CNVs). This work has been powered by statistical methods that leverage haplotype-sharing among distantly related individuals in large biobank cohorts.

Po-Ru Loh leads a statistical genetics research group in the Division of Genetics at Brigham and Women's Hospital and Harvard Medical School. His lab broadly seeks to develop and apply efficient computational tools that enable exploration of genetic effects on complex traits in biobank cohorts. Originally trained as a mathematician, he developed an interest in human genetics as well as in algorithm design during his graduate studies. He and his lab have made contributions in genome-wide association analysis, haplotype phasing, and the study of inherited and somatic genomic structural variants and their effects on human health.