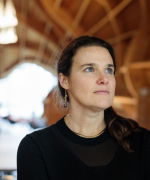 The Overton Prize recognizes the research, education, and service accomplishments of early to mid-career scientists who are emerging leaders in computational biology and bioinformatics. The Overton Prize was instituted in 2001 to honor the untimely loss of G. Christian Overton, a leading bioinformatics researcher and a founding member of the ISCB Board of Directors. Barbara Engelhardt is being recognized as the 2021 winner of the Overton Prize.

Spatial genomics is a burgeoning field but the data come with some challenges for analytic methods, including registering images across samples, small numbers of cells and genes, and a lack of normalization techniques. In this talk, I draw inspiration from the spatial statistics community to describe methods we have developed to study spatial genomics data. In particular, we develop two approaches to partition variation in gene expression into variation attributed to the cell's neighborhood and intrinsic to cell type, and we find differences in the impact of local neighborhoods on cells given location and cell type.

Barbara Engelhardt is an Associate Professor in the Princeton Computer Science Department. Prior to that, she was an assistant professor at Duke University in Biostatistics and Bioinformatics and Statistical Sciences. Professor Engelhardt’s research has contributed to statistical models and methods that capture patterns in high-dimensional biomedical data and use those patterns to make discoveries and hypotheses. Her broad application areas include genetic and genomic data, spatial and time series sequencing and imaging data, and hospital patient records. Her approaches have been used to model the state of a system accurately, predict how that system will respond to interventions, and make decisions to push the system into desirable states. Her longer term goals include understanding the underlying biological mechanisms of complex phenotypes and human disease, and making academia and the US a more diverse and inclusive place.