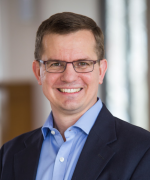 Tumors are heterogeneous mixtures of normal and cancerous cells with distinct genetic and transcriptional profiles.  In this talk, I will present several computational approaches to quantify tumor heterogeneity and to study tumor evolution using single-cell and spatial sequencing technologies.  For single-cell DNA sequencing data, I will describe algorithms to reconstruct tumor evolution from multiple types of somatic mutations and will use these approaches to analyze changes in tumor genomes over time.  For spatial transcriptomics data, I will introduce algorithms to detect genomic aberrations and to align and integrate data from multiple adjacent tissue sections leveraging both spatial and transcriptional similarity.  I will illustrate applications of these methods to quantify spatial heterogeneity in several cancer types.

Ben Raphael is a Professor of Computer Science at Princeton University.  His research focuses on the design of combinatorial and statistical algorithms for the interpretation of biological data.  Recent areas of emphasis include cancer evolution, network/pathway analysis of germline and somatic mutations, single-cell and spatial DNA/RNA sequencing, and structural variation in human and cancer genomes.  His group’s algorithms have been used in multiple projects from The Cancer Genome Atlas (TCGA) and the International Cancer Genome Consortium (ICGC).  He received an S.B. in Mathematics from MIT, a Ph.D. in Mathematics from the University of California, San Diego (UCSD), completed postdoctoral training in Bioinformatics and Computer Science at UCSD, and was on the faculty of Brown University (2006-2016).  He is an elected Fellow of the International Society for Computational Biology (2020) and a recipient of the Alfred P. Sloan Research Fellowship, the NSF CAREER award, and a Career Award at the Scientific Interface from the Burroughs Wellcome Fund.