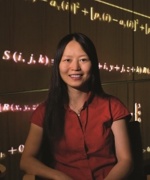 The Encyclopedia of DNA Elements (ENCODE) Consortium has generated thousands of genomic datasets with the goal of annotating the functional elements in the human and mouse genomes. As members of the Data Analysis Center of the Consortium, we have worked with other Consortium members to integrate such genomic datasets generated by the ENCODE and Roadmap Epigenomics Consortia to create a collection of genomic annotations termed the ENCODE Encyclopedia. The Encyclopedia has three levels. The ground level consists of annotations that are very close to the experimental data, such as DNase I hypersensitive sites (DHSs) and “peaks” of histone modifications or transcription factor occupancy. In the middle level of the Encyclopedia resides a registry of candidate regulatory elements (cREs) that are anchored on DHSs in roughly 200 human cell types and 50 mouse cell types, and further annotated with histone modifications and transcription factor occupancy. We show that the registry is accurate in identifying functional promoters and enhancers in a cell type specific manners, evaluated using functional data such as mouse transgenic assays. We also show that the registry is comprehensive—it can identify promoters and enhancers in cell types for which DNase-seq experiments have not been performed. The top level of the Encyclopedia contains chromatin state calls using semi-automated genome annotation algorithms such as Segway and ChromHMM, for those cell types that have been interrogated by a complete or near-complete set of epigenomic assays. We have developed a Web-based database and visualization tool SCREEN (Search Candidate Regulatory Elements by ENCODE). SCREEN enables users to explore candidate cREs in the Registry across hundreds of cell and tissues types and filter regions by various facets. The user can use SCREEN to compare enhancer-like elements across tissues, predict enhancer-gene interactions, visualize gene expression profiles, and annotate genetic variants. SCREEN also provides the functionality to access and download supporting data, as well as visualize regions of interest using dynamic graphs and external genome browsers.

Biography:
Zhiping Weng received her B.S. in Electrical Engineering from University of Science and Technology of China in 1992 and Ph.D. in Biomedical Engineering from Boston University in 1997. Dr. Weng is a full professor and Director of Program in Bioinformatics and Integrative Biology at University of Massachusetts Medical School. She develops and applies computational methods to study biological problems, e.g., gene regulation by transcriptional and post-transcriptional (small silencing RNA) mechanisms and protein-protein interaction. Dr. Weng is a key member of the ENCODE consortium and heads its data analysis center. She is also a member of the data analysis center of the psychENCODE consortium. Her lab performs integrative analysis on the rich genomic, epigenomic, and transcriptomic data generated by the two consortia.